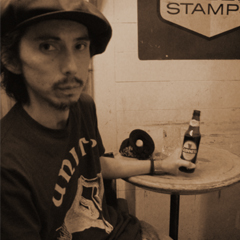 Kads MIIDA is an artist who works with the theme of "to be free, to be a part of nature" to produce colorful works brimming with vitality.

He started to work as an illustrator during the latter half of the 1980s, while studying at Tokyo Zokei University. The core of his creative activity is painting—oil painting, acrylic painting, prints, and murals—although it runs the whole gamut. He also creates products such as clothing and household items; designs artwork for shop interiors, logos, and advertising; performs live painting in collaboration with a variety of musicians; and publishes picture books based on his own experiences.

While Kads MIIDA's focus was on traveling overseas until the 2011 earthquake, he has since turned his attention to Japan, traveling the entire country to observe it afresh. Working with people who he has met in various places, he is striving to produce works that bear a message for the next generation. His 2013 solo exhibition, "Future Souvenir Exhibition," focused on collaboration with Japan's traditional craftsmen working in media such as lacquer or indigo dyeing.

In terms of painting, while a great deal of his production has worked with Japanese themes, he has recently adopted techniques from genres such as nihonga—Japanese style painting—as he works to expand his expressive range and sublimate his own concepts further.